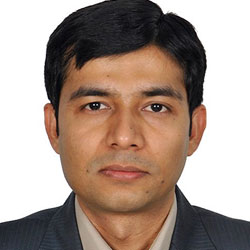 In his career span, he has worked actively in the field development of two Deep-water and one shallow water Oil & Gas fields in KG offshore basin of India. He has executed several reservoir characterization projects in Cambay basin of India and carried out field assessment studies in Cambay as well as Assam-Arakan basins. He has also executed a number of reservoir characterization projects over a wide range of sedimentary basins across Canada, USA, UK and Saudi Arabia in both conventional and unconventional reservoirs including Shale Gas plays.

His current area of interest is quantitative seismic interpretation for predicting rock parameters.