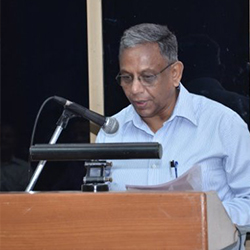 Gautam Sen is a Geoscientist with over four decades of experience in Hydrocarbon Exploration in both technical and leadership roles. His area of expertise include Basin Analysis, Play Identification, Block Evaluation, Prospect Evaluation, Seismic API and DHI studies, Farm-In, Due diligence, and many more. He guided exploration efforts of ONGC for over three decades and has many successes in Deep and shallow water of East and West Coast of India, On-land rifted Cambay Basin in Gujarat. He played a key role that lead ONGC to Farm-in Myanmar blocks
Gautam Sen during his early career, worked as a geophysicist in seismic acquisition, onshore and offshore VSP data acquisition in offshore, seismic modeling, software development ,2D and 3D seismic data processing, Seismic interpretation for identifying plays and prospects, Basin analysis and in interpretative processing, AVO, Inversion, Rock Physics etc. He was a pioneer in starting 3D processing in GEOPIC in late eighties.
He also served as Chief Corporate Planner, and was the Corporate Face of ONGC to stakeholders including Government of India. His other roles include Chief HRD and in HR management in ONGC, Mentoring and Training Exploration Teams, Executive Level Recruitment, and Represent ONGC at various forums, Government and Industry, nationally and internationally.
Gautam Sen worked as Technical head of Geosciences at Reliance Industries Ltd (RIL), in India and was responsible for release of drilling locations, Geology and Geophysics work flows, peer reviews and seismic Acquisition, Processing and Interpretation (API). He was also a Key Technical Leader in reviewing RIL’s international blocks in Latin America, Timor, and Kurdistan. Gautam Sen also advised for many companies like Sahara Group, Prize Petroleum etc in their Exploration and Farm-In activities.
Gautam Sen has presented many papers, many publications in reputed journals, and wrote many industry reports. He was conferred the prestigious National Mineral Award for Geophysics in 2000 for innovative work in 3D Seismic by Government of India. He also Chaired and reviewed papers for the SEG USA and was a guest faculty with IIM Kolkata in 2013 -14.